Dealing with resistance to change/findings from teaching challenges


As a coach, you are often in the situation to deal with change resistance. I myself made a small research about an apparently weird resistance - `success resistance``, read more.

In the article I share here, the authors present findings about human learning process, and propose different ways to overcome reluctance to change, but rooted in the very acknowledge of the fact that reluctance is a natural, i.e. legitimate!, reaction of people. As we easily notice, the solutions are quite similar with broad coaching techniques every school of coaching use to train their trainees.

For instance, the fact that`a learner’s prior beliefs can be resistant to change, even when presented with new information`, could be a major cause for failure of many specific training programs.
Teachers solve this problem through: `change our focus by directly confronting common misconceptions (of the learner, my note)`. Well, this is a core coaching technique.

The article emphasis that training (learning) could easily remain ineffective, if they are not integrating coaching tools, or they are not followed by coaching sessions.

Another very interesting point of view could spring from this aspect:”Research shows that perceived efficacy directly changes “the diligence and resolve with which groups choose to pursue their goals.” Attention, is not about the student perceived efficacy, but about teachers perceived efficacy. This one - as much as it is, or is not! - could be a model for the `recipient`, be he/she a student or a coachee*. I chose the image bellow because it suggests also the ways one could raise the self-efficacy of the learner. Otherwise, as Henry Ford stated `Whether you think you can or you think you can`t- you are right`. 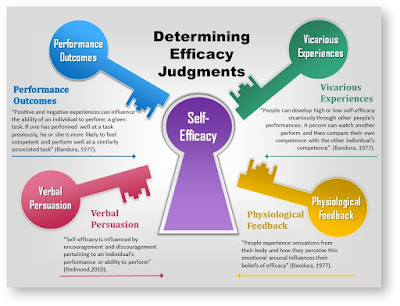 `There’s nothing unusual about our resistance to change—it’s human nature. However, as educators, we can and should take time for introspection, leveling-up our expectations for ourselves and recognizing areas of improvement.` This is also a truth for coaching practitioners!

The entire article here
..............................
* In this respect, I am very proud of my effect - read my self-efficacy - on NESTworking participants: there are changes they start to pursue from the very first session of our workshop, and there are perceived changes reported by their peers or work partners during the learning period. And there are descriptive messages - I receive years after the workshops end  -  about post-workshop benefits they experience in their personal and professional life due to new, more appropriate habits they developed. Their self-efficacy grow!

Etichete: writtings on coaching/good for no matter what 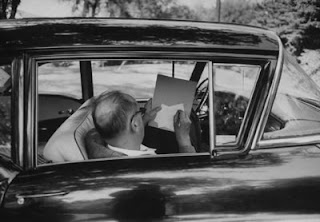 “Here lies the sense of literary creation: to portray ordinary objects as they will be reflected in the kindly mirrors of future times… the times when a man who might put on the most ordinary jacket of today will be dressed up for an elegant masquerade.”

Mirrors the future times indeed... Isn`t it a quite fairly reproduction of his way of working with indexed cards our way of working with windows? In his garrage, Bill Gates read Nabokov?! :P
Or, at least, this interview from Playboy, from 1964 ... read more. 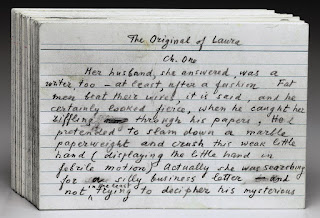 
This is a verse from a famous section of Tao te ching, written by Lao Tse, thousands years ago. And yet so actual.

Here you are one of my firsts writing on coaching, just months after finishing (2008) what was to become the best coaching training in Romania - ”Coaching Fundamentals”, designed and held by Alain Cardon, MCC.

What amazed me in terms of efficiency in coaching process was the silence tool - a sort of emptiness, but not the sort that frighten us, or the one which blame us for. It is a ”quality silence”, an empathetic, respectful, and, by all means, acknowledging clients potential and securing a place to be in a natural form, with her/his innate capabilities to live her/his life.

Scientists discovered, decades before, that an amputated limb is still perceived by the brain as being there, as well as a cut part of a leaf is still at its place, as we can see in this Kirlian effect picture: 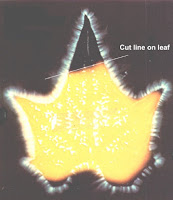 Many clients display a sort of ”chopped wholeness”, and the very role of a coach is to help them to recover their ”chunks” of possible probable potential. People are generally preoccupied by lost chunkces (sic!), but they named it ”failures”, or ”bad luck”, or - yes! - ”this is me”.

By the precise fact that the coach provides space for ”this could be real me”, the client is encouraged and invited to see the part she/he has thought was lost. Be silent - the client would hear her/his best inner voice.

About coaching as Chinese painting
Maybe you will overlook the subtitle and you will read – through a more used filter – “Chinese pinching”. That's wonderful! You just learned something else about yourself, you had the opportunity to leave the inner voice to talk, you made one more step towards that Gauguin’s “Where are we going?”, he himself given to the Chinese space, via Tahiti.

About coaching is it often stated that...read more.

NESTworking™ is a development environment where we use silence, and support participants to use it for their own sake and for better communicating with others, for creating a culture of empowerment through ownership, of accountability and joy in the workplace - and in their personal life.
Publicat de coach Magda Bunea la 8.8.17

Etichete: atelier de comunicare: NESTworking, writtings on coaching/good for no matter what

Laurie Anderson/ The Beginning of Memory

”There's a story in an ancient play about birds called The Birds
And it's a short story from before the world began
From a time when there was no earth, no land.
Only air and birds everywhere.

And one of these birds was a lark and one day her father died.
And this was a really big problem because what should they do with the body?
There was no place to put the body because there was no earth.

And finally the lark had a solution.
She decided to bury her father in the back of her own head.
And this was the beginning of memory.
Because before this no one could remember a thing.
They were just constantly flying in circles.
Constantly flying in huge circles.” 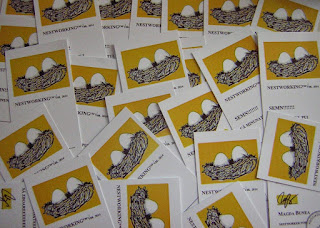 Avem atelier in septembrie. Tell to whom it may concern!
Publicat de coach Magda Bunea la 3.8.17